Itchy  is another of the miniature horses on the farm.   He came to us spring of 2007 as a new foal.  Talk about a little cutie!

Itchy has a way of always getting himself into trouble.  I would have to say he is the naughtiest animal on the farm.

Over the years he has managed to nearly cut his leg off, had a big round hay bale dropped on himself, ended up under the neighbors deck, singed his behind on a bonfire and spends equal time in and out of the fence. 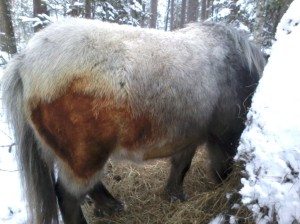 A singed pony behind….

Laura spent most of an afternoon one summer tromping around the pine hill looking for him after a call from the neighbors asking if we were “missing something”.  She ended up with so much pine pitch in her hair she had to have it cut out.

Meanwhile, Itchy  was back in the barn acting as if he had never left the farm – little imp. 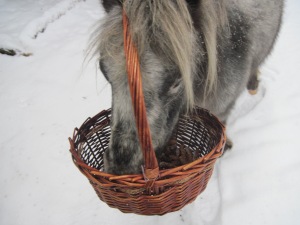 PS:  Phone calls that start with “are you missing something” are never good when you have animals – especially if it’s from the sheriff’s department….just sayin’.

This site uses Akismet to reduce spam. Learn how your comment data is processed.